The pavilion of postcontemporary curating

A proposal for the pavilion of post-contemporary curating should call upon entries that do not restrict themselves within given and obvious formal and spatial arrangements. It should gain validity and emerge within the temporal dimensions of a Plan B. We define Plan B as a period (on a personal and collective level) of looking at things from a different perspective, allowing opportunities to appear as a result of a creative opposition to frustrating and mundane conventionalities.

However, architecture is a concrete establishment. Buildings are erected for a purpose and one of their main functions is to sustain time. Yet, architecture, like the human body, comes to life in order to degenerate. It cannot escape degradation, disorganisation and dispersion, just like any other living organism. Respectively, the current derelict state of Sutton Scarsdale Hall reflects its long history and shares it with the visitor through the merely natural decay of its body. As Reza Negarestani notes …decay cannot be captured as either formation or destruction. Decay is an artificialising process that is promulgated on the substratum of all models of survival (beings). In other words, decay –unlike death- is not external to survival, for it perpetuates itself on the substratum of survival, in order to indefinitely postpone death and absolute disappearance… In no way does decay wipe out or terminate; on the contrary it keeps alive. We, therefore, believe that the decaying body of Sutton Scarsdale Hall should remain intact, whilst comprising an integral part of the pavilion that celebrates life. 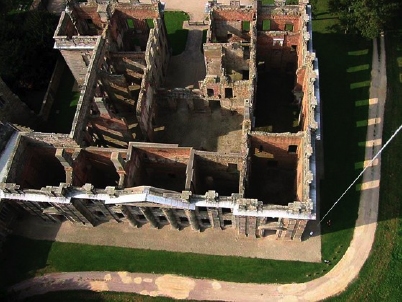 In search for new surfaces, which can tolerate Plan B activities for the pavilion of post-contemporary curating, we propose the creation of a Holey Network. The surfaces of holes created by subterranean activities, such as digging and perforation, have limitless potentiality, as opposed to the post-modern promise of a limitless potentiality available on the periphery of an ecological whole (centre, body, outer layer). In A Thousand Plateaus, Deleuze and Guattari write: Transpierce the mountains instead of scaling them, excavate the land instead of striating it, bore holes in space instead of keeping them smooth, turn the earth into Swiss cheese. An image from the film Strike [by Eisenstein] presents a holey space where a distributing group of people are rising, each emerging from his or her hole as if from a field in all directions.

If architecture is the fixed stage for human events (Aldo Rossi), then the Holey Network of Scardsdale Hall will constitute a Deleuzian (post-) event as the constituent element of a narrative. The memory of the fixed stage of the building will be re-enacted through its subterranean holey representation. Scarsdale Hall will come to life again as an event through its ability to contribute anew to a narrative. The aboveground pre-existing surfaces will be mentally twined with their subterranean mirrorings. There will be two main volumes here: one of positive and one of negative space. Together, they will form an ideal nil; if one were imposed into the other, the volume size would be zero. However, as they stand side by side, they serve as the subverted memory of each other and an expression of an event-led postcontemporary curating.

An architectural brief for the pavilion at this stage is redundant and will be developed later in conjunction with the Centre for Attention according to its needs. This is a conceptual proposal that respects the life of Sutton Scarsdale Hall without fetishising its decaying process, whilst at the same time tries to locate and justify the grounds upon which a pavilion of post-contemporary curating can emerge.